It’s taken me a while to get the full review completed (primarily work was taking up all of my time), but I felt the extra time spent with the console (since its November 7 launch) was required to do my review justice. However unlike my previous reviews I have put most of my thoughts into a couple of videos which will explore some of the pros and cons of the console.

For me my Xbox One X journey started last year when I purchased my budget Hisense H43M3000 43" UHD HDR TV. I remember asking myself the question at the time, "Could you buy a 4K TV that does not cost the earth, but yet will still work with the upcoming 4K console?".

To cut a long story short the answer is a resounding YES! My Hisense TV cost me just under £300 and I have to say the 4K side looks the business!

However visuals are not the only benefit to the console, as you will find out below…

This video was added shortly after I got the console, so if you need to recap or simply want to find out about the design/ports etc, please take a look at the video below.

Basically the first part of the video looks at the loading times of the console in comparison to my original Xbox One.

Without giving away too many spoilers, for the majority of time existing game titles will load quicker on the Xbox One X than they do on the original console. This in part is thanks to the speed of the hard drive which runs at 7200rpm, vs the originals 5400rpm. Additionally you get more bandwidth allocated to the hard drive, which is primarily designed to handle the high resolution PC style textures that the console can bring to the table.

Thus, along with the latter benefits and increased 12GB DDR5 RAM/vs 8GB DDR 3, its no surprise that the console delivers. Mind you there are exceptions to the rule and it seems when you have enhanced games (which tap into the full resources of the console) loading times can be longer. Thankfully this odd occurrence does not take any shine off the console.

I nearly forgot to add that in the video I also take a look at the loading of games from both an internal and external drive. An external drive is something you will have to seriously consider when buying this console as storage is a premium even with a 1TB drive as standard.

I also need to mention that the videos were captured in real-time on an iPhone 6S at 4K/30fps and then of course compressed down during the editing/You Tube process. However I’ve managed to get the Xbox One X loading on the left side of the screen and the Xbox One on the right. The videos are then merged together to make it look like it is only on one screen. I felt that this was a better way of showing you some of the real world differences in loading times.

Thus, as a result you won’t find any countdown times in place, but instead you will get me doing commentary on any interesting aspects I find during the loading sequences.

The second/final part of the video deals with the visual side of things and this is something I feel most people will be interested in. Like the loading video I’ve managed to merge the Xbox One X and Xbox One into one view. Due to the compression side, which dampens the original 4K recording, I felt this was the best way to physically show people the differences the console can provide. So even when watching on a standard TV/Monitor you should get a reasonable grasp of matters.

Additionally I’ve uploaded several screenshots to my Flickr account, which may also be useful for those who want to see an un-edited version of the source material.

The video itself features a look at a UHD Film Vs Blu-ray, UHD vs HD streaming and of course 4K vs HD games. With the games side you have a few smaller side-by-side comparisons, various static images and then some actual gameplay. Because the video was shot of the TV with the games running on them, the quality may not offer a 100% representation of the full quality, but again I hope it will give you some idea as to the visual differences.

What I love about my Xbox One X is the way some games offer a couple of graphical modes. For example titles such as Gears of War 4 have a native 4K 30fps mode and a Full HD 60fps performance mode. This way you have a choice over visual vs frame-rate performance. However because of the game using PC quality high resolution textures, it still looks awesome in which ever mode you run it in! Plus I was also able to play my games on a FULL HD screen for a week and I am happy to say games still look blomin awesome here as well. Though if I’m being brutally honest having a 4K screen is still the best way to go.

Finally the last bonus video takes a look at some of the Picture Mode settings I’m currently using on my Hisesnse H43M3000 TV. I’m still tweaking these by the day, especially as a lot of them are being carried over from the Xbox One days. However for the most part HDR apps, such as Netflix, have proven more of a challenge to get right. Thankfully the Media support for this console is improving by the day and that's the great thing with the Xbox One X, it’s not just about the games, it can also provide the option to tap into all manor of 4K goodliness! UHD Blu-ray drive, 4K streaming, you name it!

Bonus: Settings Video
I take a quick look here of the settings I have been using on my TV for the Xbox One X.

I speak about my conclusion in my part 2 video. However I wanted to mention that I personally think the Xbox One X is a superb piece of kit, with only a few negatives that I can think of. The negatives are simply that the Home Interface has gone down the Apple route, so it’s identical to the original visually. You won’t find any 4K visual textures here, but I’m glad they listened to the developers and gave them some extra reserved system RAM so that games can run better! The interface though does benefit from Microsoft's latest speed increases, which is more evident on the Xbox One X, with faster loading of the on-screen assets for example.

Speaking of which existing games generally load faster than the original machine, bar the odd exception. Additionally there is some Anti-aliasing trickery built into the hardware to, that even makes existing games (including backwards compatibility titles) look/perform better!

Sadly the biggest drawback for me is that the 1TB drive is not nearly as big enough to handle a quantity of games. For example, with 100GB of downloads, for titles such as Gears of Ward 4/Quantum Break, your internal drive will fill up fast and you will still need an uncapped internet connection to download them in the first place!

On a positive note build quality is top draw and the console is whisper quiet to, even quieter than the original and Xbox One S. I’ve also noticed the temperature of the console does not get that hot to the touch either, so from an engineering point it’s superb!

Granted the price is a talking point and it’s one concern that nearly made me bail once or twice. Yet now that I own one, I don’t really think about the higher price tag anymore. In fact the price never comes into my mind when I’m playing the quality games on offer. Plus once you get over the initial price pain the feeling will soon pass. In all honesty for existing Xbox One owners (not so much Xbox One S as this is still a great console for the money) the tech on offer and the quality boost that existing and upcoming games are likely to get, leads me to feel that it will offer enough incentive for existing users/those on the fence, to purchase one. Especially as all your current Xbox One accessories work on the Xbox One X as well!

More importantly the Xbox One X now means I don’t have to worry too much about visuals, because I know that the console will deliver. I’m confident of that! Its also made me want to get back into gaming more. For example I now want to grab games to see the enhancements that are being made. I’m also starting to buy games, such as Final Fantasy 15, that I thought I would never play. I have even upgraded my PC graphics card, so I can tap into the Play Anywhere titles. Heck I may even look at grabbing a bargain PS4 Pro now so I can finally play Horizon Zero dawn. It’s a crazy statement, but buying the Xbox One X has some how reignited my enthusiasm for games and this is what it should be all about. So if you get an Xbox One X for Xmas or are still on the fence, don’t worry, once you get one you will understand!

In the meantime Have a Great Xmas & a Happy New Year! :-) 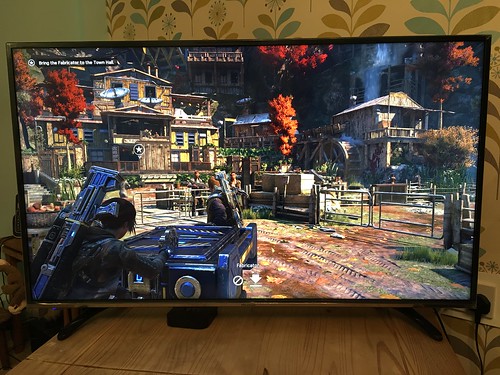 Which Games Will Dominate Early 2019?

How Will Tech Redefine the Online Gaming…

The Potential of The Steady Surge In The…

AR Could Change the Face of Video Gaming…

Will the Online Gaming Experience Carry …

Are Mobile Payment Platforms the Future …

﻿﻿Is online casino VR/AR the next big th…

Virtual Reality: What’s The Next Step?

The human race has always dreamt of the technology of the future, and nothing exemplifies this more than virtual reality. Back in the 1950s, when the Space Race was underway...

At the start of the week Microsoft started to roll out a Creators Update for those members in the Xbox and Windows 10 Insider Programs. The updates will all start...

Can you really turn your old unwanted phones into dashboard cams?

Dashboard cameras, or dash cams, are hugely popular. They’re available at various price points depending on features and quality, but it is possible to fix your car up with a...

MMD, the tech company and brand license partner for Philips Monitors, has announced the BDM4037UW, a 40" Philips Brilliance 4K Ultra HD LCD display with MultiView feature. This screen is said...

Released at the middle part of 2016 the Vodafone Smart Platinum 7 (pretty much the same spec as the Alcatel idol 4s) was perhaps one of the most surprising handset’s...

Well it’s nearly time to pack up now for the XMAS break, but before I go I just wanted to share with you guys a quick look at an App...